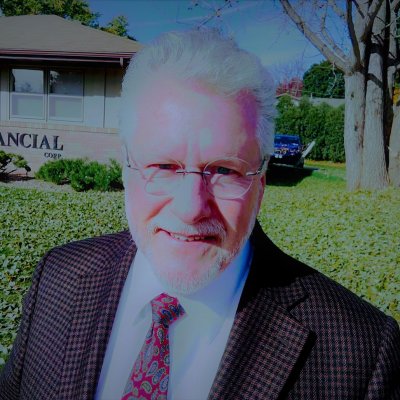 We're not going to have an opportunity to record outside too much longer because I think within the next month, we will probably have snow on the ground. It's been an interesting week; we started really warm in the beginning of the week and we're supposed to end the week really warm, but in the first couple days of this week, the windchill temperature in our area actually got below 0℉. This time of the year something unique happens on the outside of the Financialoscopy building. If you watch the video, I moved the camera up a little bit so you can look at our Ginkgo tree. You can see that our tree has lost all of its leaves. I don't know what you know about Ginkgo trees. They actually have been found preserved in fossils because these trees have been around since the dinosaurs roamed the planet. The way that Ginkgo trees lose their leaves is not like maple trees or oak trees. Sometimes, oak trees will literally hold on to their leaves all the way through the winter, and they will finally drop them sometime in March. Maple trees typically they will lose all their leaves not immediately, but over the course of a few weeks. A Ginkgo tree, once the temperature drops below 32° Fahrenheit, all the leaves automatically, literally in one day, the entire tree, everything drops.

Why am I talking about Ginkgo trees today outside of the Financialoscopy building? It's because I want to talk about level Term Insurance because I literally just got off the telephone with some long, long-term owners of level Term Insurance policies. In fact, I went back to the original paperwork that I have here in my hand, and they originally purchased these policies back when they were 30 years of age. Oh, by the way, these people had great health back then. I mean they received the super-duper, select premium rates for Term Insurance. It was like the best rates you could ever get. But level Term Insurance is just that; it's level for a set period of time. Just like so many other people, they purchased policies for a period of 20 years. Well guess what? Their Term Insurance expires in about 1 week. After 20 years, it expires in about 1 week, and over the period of the last 20 years between the husband and the wife they spent over $17,000 on Term Insurance.

Now, you might be thinking yourself, “Mark, I would never have bought Term Insurance that would have cost me that much money.” Here's the deal: Term Insurance is actually initially less costly and will appear to be less expensive than other kinds of permanent insurance. But here's the Crux: you pay and you pay and you pay, and it's like renting an apartment someplace; eventually, you're going to be thrown out. Or, it’s like this Ginkgo tree; when it comes fall and the temperature drops below 32℉, all of a sudden, it’s done. It's done. All the leaves have come off and it is done.

So, what have we learned here? Term Insurance is a great thing to own, if you have a need for a lot of insurance for a short amount of time. It's also great when you don't have a lot of money, and you're really pinching pennies, and you want to make sure that your family is covered in the event of your unexpected death. Here's the deal from what my experience has been over the period of the last 35 years: eventually, people realize that they are not getting out alive and wish they had insurance already in place.

Now, some people might say, “You know what, I really don't need insurance for my later years because I've already accumulated money into 401ks and IRAs.” But listen to me folks, your 401k or IRA are those investments that you have because typically, they are the traditional plans for what you were doing when you were in your 30s, 40s, 50s, and 60 years of age. So, what occurs when that stuff is liquidated at your death? Guess who gets the biggest chunk of change $$$. It is usually the government because you have to pay federal taxes, then you have to pay state taxes. Who knows, they might institute excise taxes again by then because those kind of come and go from one administration to another.

It's important to be thinking long-term. What am I doing long-term that will last the whole of my life? Let's think about this: think about love. Do you love people for a term of time, or do you love people for the whole of your life? I have nothing against Term Insurance. I have owned a lot Term Insurance policies during the course of my lifetime. I have owned combinations of term and permanent Whole Life Insurance policies issued by a mutual life Insurance company. But I know at the end of the day, if I want something that's Ironclad, solid with guarantees, a place that I can store my safe money that would be there for emergencies and opportunities, and I don't have to worry about the insurance company kicking me out after 20 years, or worse yet after 10 years, I want permanent Whole Life Insurance.

Don't be like a prehistoric Ginkgo tree that when a certain season of life occurs, drops all of its’ leaves and it’s all over. Instead, if you can look way in the back of our business behind the parking lot, you will see Evergreens. Here's the thing: Evergreens are ever-green. Just like Whole Life Insurance is there for your whole life, they are forever green.

If you want more information about us and to be able to run numbers and take a look at your own situation, reach out to us. Contact us through my website and while you're there, why don't you pick up a copy of my book or listen to the audible version of Investments Don't Hug: Embracing the Life Insurance Asset and Don’t be a ginkgo.

How do you Rent Money?

Get out of the Roundabout

Come to a complete STOP