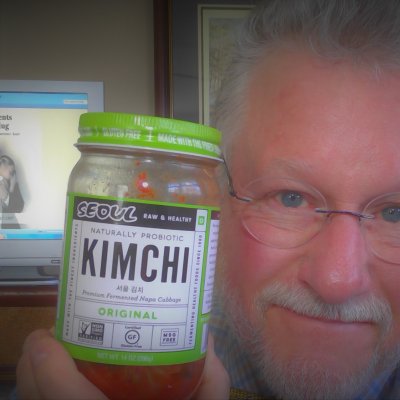 Today I want to talk about Kimchi.  What is Kimchi?  This is probably one of the most popular foods in the Republic of Korea, what you and I would call South Korea.  The ingredients are very simple:  cabbage, chili pepper, carrots, garlic, green onions, cane sugar, more onions, salted baby shrimp, sea salt, ginger, anchovy extract.  That might not sound too appealing to you, but if you are from Korea, this is just part of your regular diet.  This is something you would have kind of used as a condiment, whether it’s going to be for breakfast, lunch, dinner, a snack, Kimchi is a mainstay.

During what we call the Korean war, Kimchi was one of those foods that allowed the population to survive, but here is the key, and I’m going to have a tie in here in a moment.  They key is that the people in South Korea had to hide their Kimchi, which was always homemade at the time.  It was made and put into clay pots.  This is actually a gift that we had received from a family friend from South Korea.  This must be about a five-gallon pot.  On the top is a lid.  After the Kimchi was made (and these are still made today), people would actually put the Kimchi in these pots, and to this day, they can be found in the homes in Korea.  After the Korean war, they were actually buried in the ground, and the primary purpose that they were buried in the ground is the people in South Korea did not want the army from the North to find their food.  It was during a time of starvation and war, and this is the food that helped them survive.

Here’s the tie in today:  we are in the middle of a pandemic, in the middle of the COVID-19, and financial advisors are talking about the importance of emergency funds.  Isn’t that always the case that people talk about emergency funds, and establishing an emergency fund, usually when there is an emergency, as there is right now.  Here’s something I want you to consider today – establish and emergency fund if you don’t already have one, and lock it away into your own, metaphorically speaking, Kimchi pot.  An emergency fund is not when we put money into a retirement account that has penalties if we want to access it.  It’s not in some crazy market where it goes up and down on a regular basis.  It’s someplace where it’s safe, sound, and secure, and accessible and liquid.  It’s a place for safe money.  You can actually do this with a permanent whole life insurance policy where you are killing two birds with one stone.  You are taking care of a death benefit for future needs, but you are also finding a place to store your safe cash in the event of an emergency and also in the event of an opportunity, but it needs to be liquid.  It needs to be safe.  It kind of needs to be hidden away, similar to what our friends in the Republic of Korea did during the Korean war, where they took their food that would get them through.  They would store it away, literally bury it so others could not rob them of it.

Thank you for your time today.  Be well.