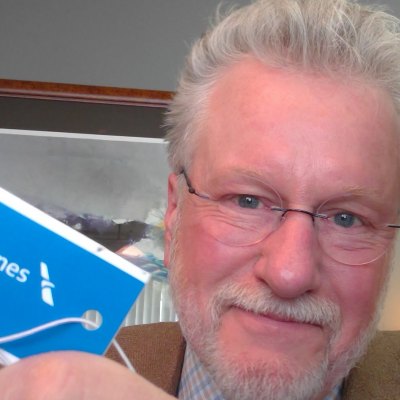 I was traveling recently, and whenever I travel, I like to engage with people along the way.  So as I was traveling from Detroit, Michigan to Salt Lake City, Utah, I engaged a conversation with a gentleman next to me who had just transferred from a flight from Montreal, Canada.  He was actually originally from Paris, has a wife, two children, but at one point, I asked, “So, what do you do for a living?”

And he said, “I take care of supply chains.  I make certain that supplies come to our factory so they are of top quality.”

“So, what is it your company makes?” I asked.

As he looked around the airplane, he said, “Our company make airbus planes, like the one we are in right now.”  Obviously, my attention kind of sparked up a little bit, perked up, because now I was having a conversation with someone who is actually part of the process of making the plane that we are in at an altitude of 30,000 feet.

I asked, “So, there are a lot of parts to this plane, which are the ones you are in charge of?”

“The flight deck - That’s where the pilots reside.  That’s where all the bells and whistles and all the buttons, what actually steers the plane.” he said.

“So, what exactly do you do on these trips?”

He said, “I travel about once a month, and I go to the different suppliers to make certain that the supplies are coming in on time and that they also meet our quality specs.”

Now, the reason I bring up this story is because I was on my way to Salt Lake City for a software school that does nothing but crunch numbers.  In fact, we were to arrive on Tuesday night; me and a fellow associate, and the classroom was going to be on Wednesday from 8:30 in the morning until 8:30 at night, 12 hours; Thursday from 8:30 in the morning until 8:30 at night, 12 hours; and then on Friday from 8:30 until 5:00 in the afternoon, so most people could grab a plane on the way home.

The reason I talk about this is this is one of the ways, regarding life insurance, that I need to make certain that the supply chain is doing exactly what it should be.  It doesn’t make any difference what one company says they have the best of this, the best of that, the new and improved, but instead what I was doing during this three day period of time, was putting together scenarios where I could use mathematical software to prove whether it worked, or whether it didn’t.

When I wrote my book, “Investments Don’t Hug – Embracing the Life Insurance Asset”, the very last chapter I added to my book, some home office personnel at several life insurance companies were very surprised that I delved into the math.  In fact, several from the service departments were very, very happy that I was talking about something that often times is neglected in the conversation of how a person should put together a life insurance program.

Chapter 20 is titled: “The Default Worst Case Scenario”.  It is an entire chapter that I discuss the non-forfeiture guaranteed situation that the insurance company offers in all of their policies – the non-forfeiture clause.  What happens under the worst case scenario if the company does not have the profits that we would expect them to have?  What is the worst case?

As I delve into life insurance policies, assisting people and making those decisions, I care less and less about all the beautiful numbers that they come up with – all the wonderful projections on how things should work.  I like to look at what happens when things don’t go as planned, and that’s why I address it in my book to assist the public, to assist you in determining the right course of action for yourself, for your spouse, and for your family.

You can listen to my book “Investments Don’t Hug – Embracing the Life Insurance Asset” on Audible or on I-Tunes, but I would recommend that you would get the book.  Use it as a text book.  Use it as an owner’s manual on how life insurance works, how it should be programmed into your life, and what the guarantees are because you don’t want to get this one wrong.

To find out more about my book, go to our website www.Investmentsdonthug.com.