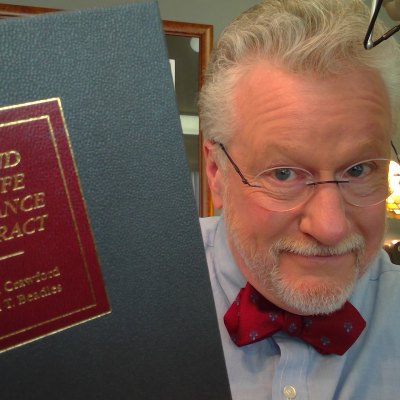 What does the contract say?

Contracts.  I am a believer in contracts, but it does depend on who is writing that contract.  Back in 1998, I had some questions regarding Roth IRA’s when they were first introduced, wondering if that contract would ever change.  Because it depends on who writes the contract, whether it is going to be seen through to the end the way that you thought it was going to be in the beginning.

It took several months, and finally I did receive a letter from the United States Senate, from Senator Feingold’s office, and I knew what the answer was going to be.  It was good to actually see it in writing, thanking me first for my interest regarding the Roth IRA’s and saying that my questions were excellent.  The second paragraph went on to say, “As you know, Congress is unable to pass laws that prevent a future Congress from changing those laws, i.e. changing the contract.”

Often times I will refer to what I believe to be the first Roth IRA that was actually set up during the administration of Franklin Roosevelt, and what that Roth IRA, in my opinion, was Social Security.  There was a time when Social Security was always income tax free, until 1981.  In 1981, the Social Security trust fund was running short of what the expected assets needed to be to pay future benefits.  In that year both the Republicans and the Democrats came together, Ronald Reagan and Tip O’Neill, and they agreed on a plan that did several things:

The interesting thing about this is that income level has never been indexed, so just given time, virtually everyone will be taxed at some point in time on a benefit that was never supposed to be taxed.  Then again, we know that no current Congress can create a rule, a law, a regulation that a future Congress cannot change.

The contracts between you and me and companies cannot be changed because they are contracts.   I have studied contracts over my career going back to the 1990’s.  One of the contracts I studied was the Law and the Life Insurance contract, and I continue to review contracts and look at contracts yet today because this is how a person must plan their future.  I discuss this in my book “Investments Don’t Hug – Embracing the Life Insurance Asset”, so much so that I have been asked to address a summit for advisors in late June specifically to discuss the life insurance contract.

My book “Investments Don’t Hug – Embracing the Life Insurance Asset” is available on Audible and I-Tunes but I often times will recommend that you purchase the book so you can make notes in the margins and highlight those things where you can begin planning your future, your family’s future, knowing that it is contractually sound; that you know how, under the worst case scenario, it will play out for you and for your family.

To find out more about my book, go to www.Investmentsdonthug.com.