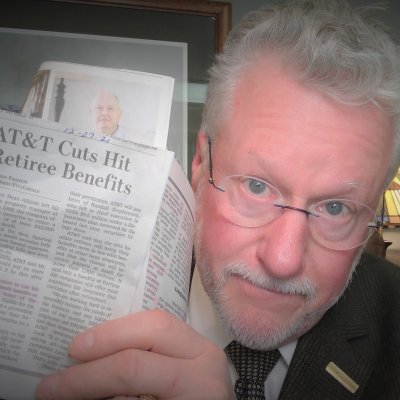 Will your employer cancel your life insurance?

Sometimes you just need to read the small print. I get paid to read the small print. That’s why I believe it is really important that you own things in your name. I find so many people are reliant on their employer and think that everything is always going to go nice and smooth no matter what happens in the future. Here’s the deal: it doesn’t necessarily work out that way. An article that I read in the Wall Street Journal in December is prompting this conversation because I don’t want this to happen to you.

The title is “AT&T Cuts Hit Retiree Benefits”. How does this affect you? Let me just hit some of the highlights on this that I highlighted last month, and how it might affect you in the future. “AT&T’s decision to cut their life insurance benefits and death benefits as of January 1st “. Okay, that’s already past. “For many of it’s 220,000 eligible retirees”. Let me just continue on. This is later on after the jump of the article. “Now the life insurance benefits, no matter what the value that they started with”. (Now mind you AT&T employees when they retired, the company told them that those who were managers were going to have company paid life insurance, which often equaled, on the final day of their employment, one years’ salary. Also, to note, that was going to decline by 50% once they reached the age of 70. Now you know why that is. We often times will see that with employer paid benefits because at the age of 70 they see that, son of a gun, you’re actually going to die. So, what happens, the cost is exponentially higher. They want to be able to cut that cost in half. So now,) “the life insurance benefits, no matter what the value that they started out with, will now be $15,000 if the management employee dies after December 31st”. That was end of last year. So, I hope some of these people got around to dying before the end of the year. The death benefit will be capped at $25,000.

A gentleman by the name of Warren Minor, currently the age of 84, so he’s not allowed to buy life insurance anywhere any longer. He retired in 1996 and in fact he was one of AT&Ts Benefit Directors. So, this is actually one of the guys to put together the plan. He lives in Florida now and he counted on being eligible for about $364,000 through a combination of this life insurance and a separate death benefit. Instead, now that it’s after December 31st, his wife is expected to get, at most (remember it was supposed to be $364,000), now gets $40,000 in total between those two programs.

Federal law, because a lot of people wonder “How can they do this? Isn’t there a law against this?” Well, it goes on to say that “Federal law bars companies from cutting pension benefits of their employees after they retire”. So, you can’t change the benefit of a pension you’re getting, but courts have said that “Other kinds of retiree benefits, those including health care, life insurance, and a death benefit, those can be changed if employers reserve the right to do so in their official documentation”. Here’s the deal: just changed the documentation. Just change it.

Another individual, this person’s named Monty, age 80, again, he’s not buying any new life insurance in his life, he retired in late 1991 after 31 years with AT&T. At the time, he said, he turned, he said, “he turned down a benefit that would have paid his widow a monthly benefit, a monthly pension, after his death figuring that she would get the life insurance, which would be at least $75,000 when he died”. Now, if he dies now, now that December 31st of last year has passed, she’s only going to get $15,000. So, here’s a case of a person going from $75,000 wasn’t going to make up the difference, so he said no to a pension for her. Now she gets $15,000 to basically put him into the ground with no money to make up for the difference of the pension that she’s not going to be getting and then that Mr. Minor’s before that was supposed to get that $364,000 payable upon his death, now his spouse is going to get $40,000.

Here’s the Deal. This is why you need to OWN your own permanent, forever, whole life insurance. You know the reason that they call it whole life? It’s because it continues for the whole of your life. That is how the name was created. Standard whole life policies continue now until the age of 121 or until death, whatever happens first and even at age 121, if you’re still going to get it because at age 121, they’re going to endow the policy and pay out what the policy should have been if you were to die, but I think most of us probably won’t make it that long.

The reason that you own your own individual life insurance policy is because you are the owner of the contract. If you have life insurance through an employer, whether you are working or are retired, you only own a certificate that says that you have a life insurance death benefit, but the owner of the policy, that’s your employer and owners can make any changes they want. So, when you hold the certificate, you might think I’m good to go. You’re not. Things can change just like these “AT&T Cuts Hit Retiree Benefits”.

If you truly want to take control, you have to truly take control. Don’t hope that the big man is going to take care of it for you because that is not the case. Lesson today learned is take the responsibility yourself. Own it yourself. Don’t rely on others when it comes to life insurance. You know, when it comes to anything in life, it all comes down to two words and will you do this today for yourself, and the two words are this, Personal Responsibility.

If you would like to learn more about these life insurance concepts, explore the investmentsdonthug.com website or go to Amazon.com and you can get a printed copy of Mark’s book when you type in “Investment’s Don’t Hug” or it is also available on Audible.